Hi everyone! Sorry to keep you guys all hanging! I bet some of you were wondering if we actually turned Nautilus around and went home. Not a chance! Stuff happens when you own a boat…just like owning a car or a land based home. We knew going into this adventure that flexibility and resilience were key. Despite some obstacles and rookie mistakes, we are having a fantastic time.

After 14 days…14 enjoyable, but somewhat frustrating days, Charleston is in our rear view mirror and we are back to cruising the Ditch (ICW) again. The boatyard in Charleston was amazing and actually pulled the boat a third time in hopes of narrowing in on our vibration problem. No luck. At this point, we knew Nautilus was safe to cruise so we made the decision to continue north and deal with the vibration later.

From Charleston, we cruised to Georgetown, South Carolina and docked at Harborwalk Marina. Georgetown is a small, but charming waterfront town. We arrived late in the afternoon so most shops and historical landmarks were closed. We did make it to Independent Seafood Market and scored some fresh shrimp and flounder. I also made a new friend!

My favorite stretch so far was cruising the Waccamaw River from Georgetown to North Myrtle Beach. The River was refreshingly beautiful and was just what I needed to give me back that ewwww, ahhhhh feeling. The Waccamaw was wide and deep and lined with cypress trees and endless osprey nets. 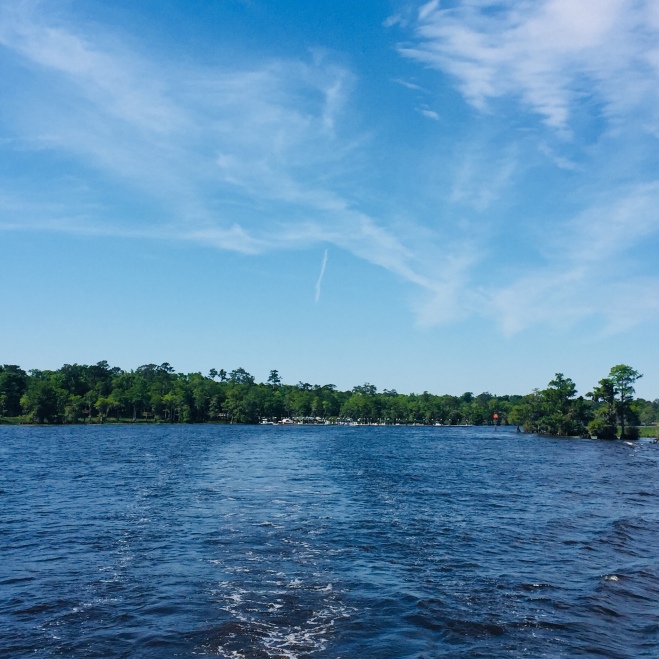 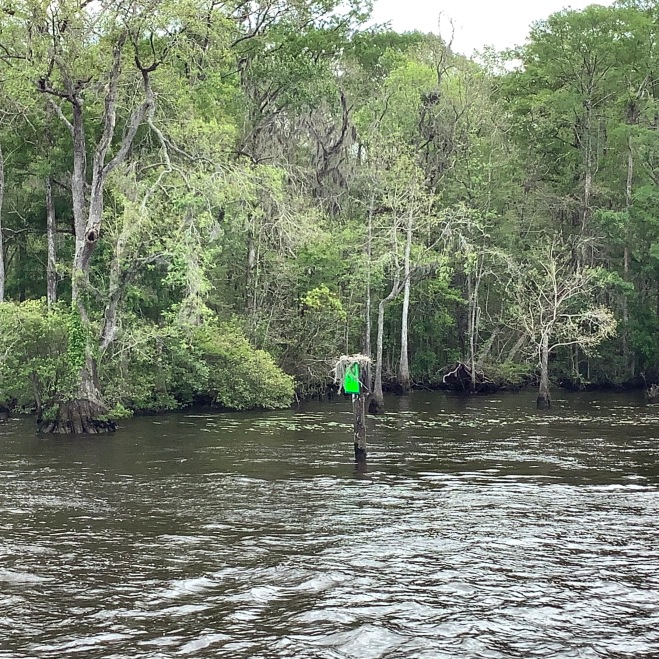 Even the infamous Rock Pile was relatively easy. The Rock Pile is a 3-mile narrow stretch of the ICW with submerged rocks and a rock shelf. When the ICW was being built, a solid ledge was discovered in this area. To stick to budget and time, the Army Corp of Engineers merely made the area narrower. 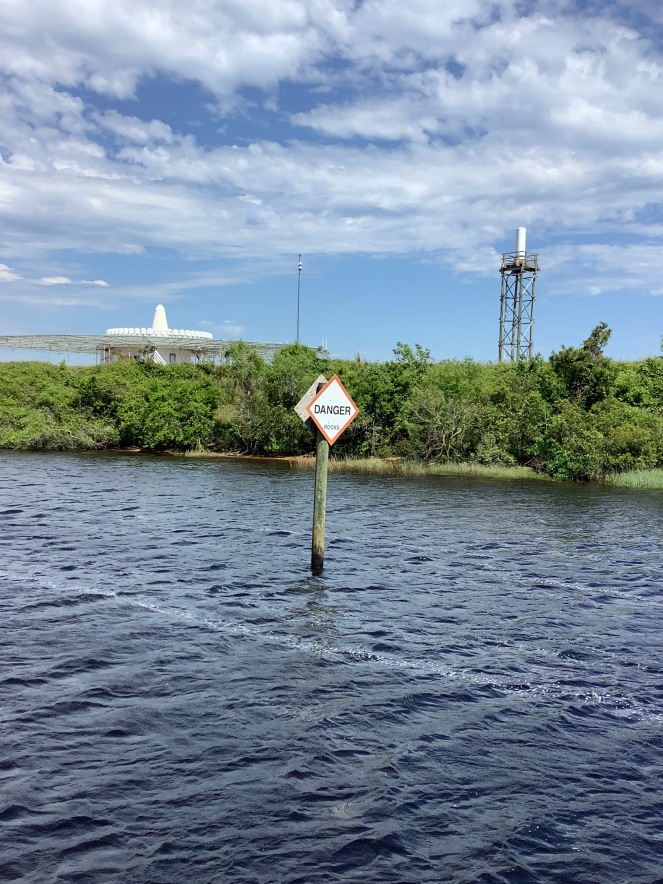 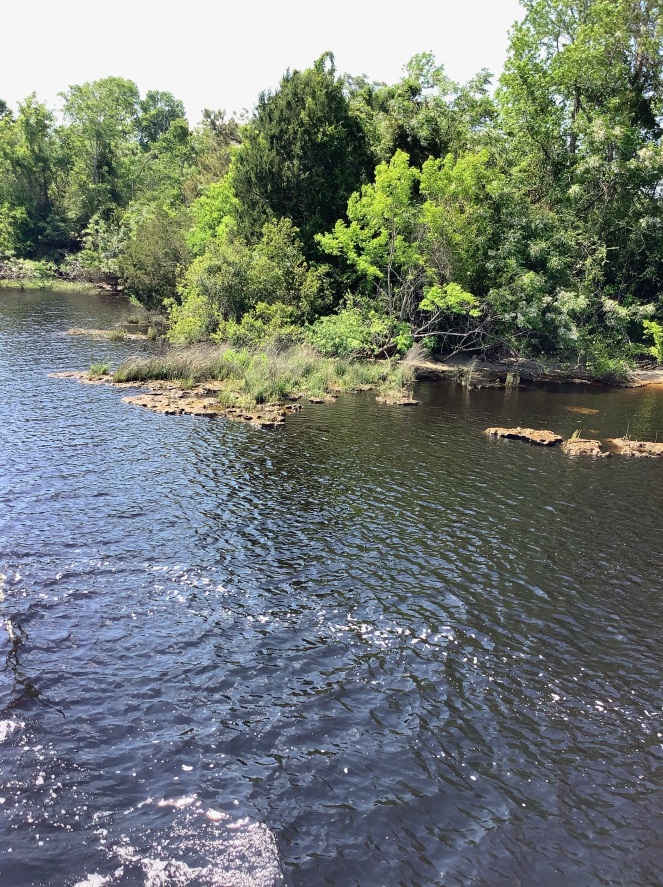 Just stay in the channel and don’t hit the rocks! Mission accomplished!

Today was bridge day. After9 fixed bridges and 3 swing bridges, we arrived in North Myrtle Beach! 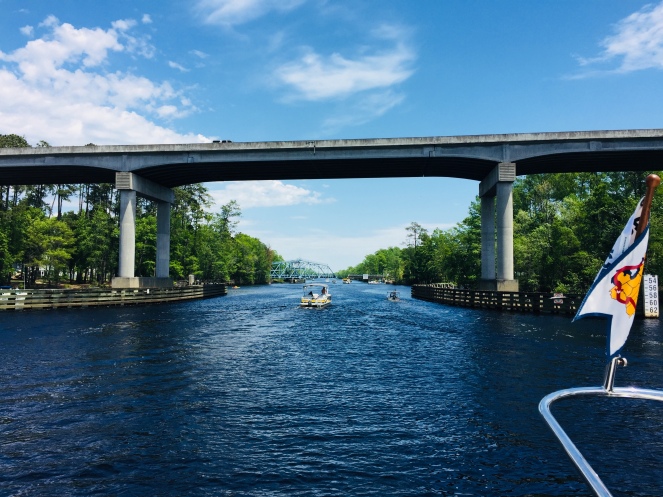 After docking in Myrtle Beach Yacht Club, we noticed all the Looper Burgees in the Marina. We walked the docks and met four other looper boats and attended our first docktails. You guys, the Looper family is amazing. I left with my stomach and heart full (and lots of boat cards).

The most exciting thing about today is crossing the *state line*. GPS told me that at 11:05am we crossed into North Carolina. Yipppeee…I think!

The ICW never ceases to amaze me. How does this shoaling happen? Why are the sunken boats still here? Why areeeeee there sunken boats?

We ran into someone who told us a little story about cruising the ICW. He said “there are three types of boaters. Those that have run aground. Those that will run aground. And the liars”. We laughed and nodded. You guys, the ICW is a two person job. It’s usually Rob driving and me on alert with every guide book we own, the binoculars and watching waterway alerts on my phone.

The dredge operator is on the radio telling us “move closer to the dredge. If you’re not right next to us, you’re gonna hit bottom”. What on earth? The funniest thing to me is the grill…lol!

We safely arrived in Southport and attended a seminar at the marina about traversing the ICW. It will prove to be invaluable.

p.s. Catch up with Rob in Captains Corner

4 thoughts on “THE DITCH”